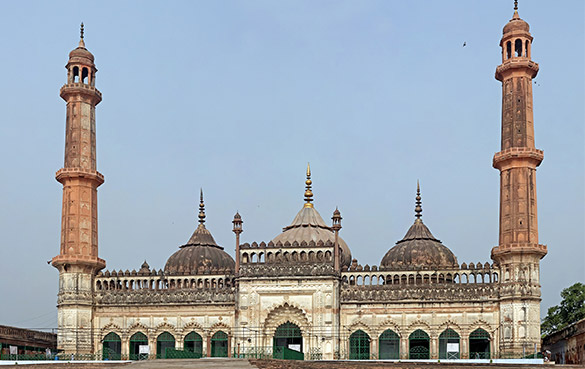 "This large structure was built by Nawab Asaf-ud-Daula in 1786-91 and is one of the architectural wonders of that era. "

Its central hall is said to be the largest vaulted chamber in the world. Except for the galleries in the interior, there is no woodwork in the entire structure. It is now used by Shia Muslims for the purpose of Azadari.

It is believed that the construction of this grand building was started in 1785 when a devastating famine had hit Awadh, and the nawab’s objective was to provide employment for people in the region for almost a decade while the famine lasted.

It has large underground passages which have been blocked up. A staircase from outside leads to a series of labyrinths known as Bhool-Bhulaiyan, which is a complicated entanglement of zig-zag passages. Visitors are advised to visit only with authorised guides. Within the compound of the Imambara is the grand Asafi Mosque. Shahi Baoli is another attraction here.