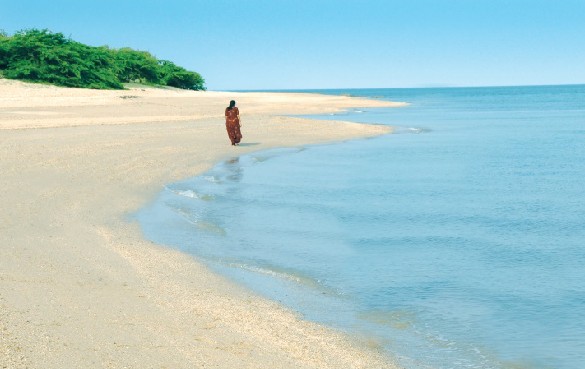 Beyt Dwarka, also known as Beyt Shankhodhar, is a small island and was the main port in the region before the development of Okha. It offers opportunities to spot dolphins, marine excursions, camping and picnicking. Most of the archaelogical ruins excavated here and religious manuscripts correspond with Beyt Dwarka as the original abode of Lord Krishna. In order to get there from Dwarka, one might need to first get to Okha port jetty (32 km), by either rail or road and then take a ferry or small boat (Rs.5/-), 5km away.

Shri Krishna Temple: From here an enormous 500 year old temple is a 15 minute walk. Built by Shri Vallabhacharya, it enshrines an idol believed to be made by Rukmini. There is a story where Lord Krishna's friend Sudama presented him with rice and so the tradition is continued by the visitors who present the Brahmins here with donations of rice. There are other smaller temples in the same vicinity of Lord Shiva, Lord Hanuman, Devi and Lord Vishnu. Beyt Dwarka is also associated with the legend where Lord Vishnu slew the demon Shankhasura.

Hanuman Temple: The magnificent Dandiwala Hanuman Temple is situated about 5 km east of the Beyt Dwarka's maintemple. It also has facilities of accomodation for visitors who might want to perform special worships. One of the rare features of this temple is the idol of Hanuman's son Makardwaja. It is said that the celebate Lord Hanuman impregnated a fish with a drop of his perspiration, which conceived and gave birth to a son as strong as Lord Hanuman. Legend also says that during the famous war of Lanka, Ravana kidnapped and kept both Lord Ram and Laxman in Patal (the world underneath the earth). Hanuman chose this place to enter Patal and had to fight Makardhwaja, who was guarding it. This is where they met and recognized each other as father and son. Hanuman Jayanti evokes a large celebration here. Also, on Dashera, the idol of Shri Krishna is adorned like Shri Ram, who is carried here for a special visit on a palkhi (palaquin).

Kachoriyu: This is a temple of Shri Rama. It carries sculptures of Garuda (eagle), Shankha (conch shell), Chakra (sharp circular weapon), along with the idol of Lord Hanuman at the entrance. The pond situated near the temple is called Kachoriyu Talav.

Haji Kirmani Pir: Towards the eastern seashore of Beyt Dwarka, one can visit the shrine of Haji Kirmani Pir, who is considered one of the important Sufi saints, hailing from Kirman, Iran. People from many religious backgrounds faithfully visit here.

Gurudwara: Beyt is believed to be the birthplace of Panjpyare's Sikh saint Shri Hukamchandji. Hence many Sikhs visit this Gurudwara located in the Budhiya area.