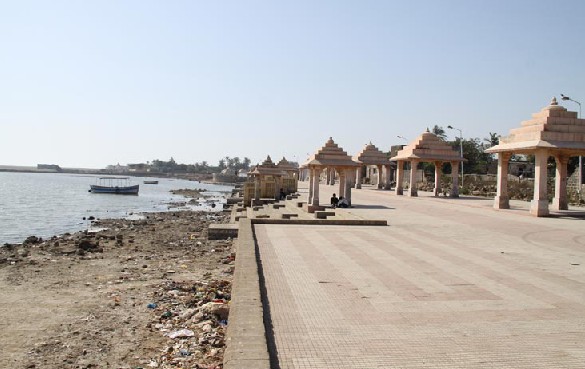 North of Somnath, en route to Veraval, is the famous Lord Krishna temple, Bhalka Tirtha, on the site where Krishna is said to have been mistakenly shot in the foot. Nearby is Dehotsarg, where he succumbed to his mortal wound. The temple at Bhalka Tirth is known as Mahaprabhuji's Bethak, and a tulsi tree has been planted in Lord Krishna's memory. At the Dehotsarg Tirth, in the 9th century AD Shri Vallabhacharya gave discourses on Shrimad Bhagvat Gita for seven days, as well as the revered Gita Mandir, which has eighteen marble pillars with a chapter from the Bhagvat Gita inscribed on each one. The temple also contains a beautiful tribhangi idol of Lord Krishna playing his flute.

Nearby is a place known as Baldev Gufa (cave). According to legend, Lord Krishna's elder brother Baldev disappeared through this cave and went to the netherworld, as he was considered to be an incarnation of Sheshnag, the king of snakes