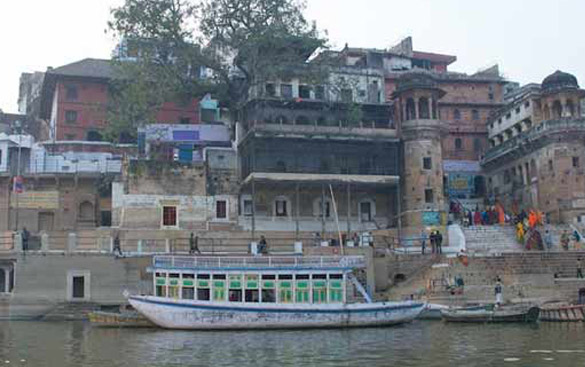 Lalita Ghat is named after the most renowned Goddess of the city, Goddess Lalita. There are variety of rituals and beliefs of the people about the Goddess Lalita Devi (embodiment of the Goddess Durga) who blessed the entire world. This Ghat is one of the most venerated Ghats of the Kashi for devotees from various corners of the country it is one of the main Ghats on the Ganga River in Varanasi. The Ghat is named after Hindu Goddess Lalita and was built in early 19th century by King of Nepal, Rana Bahadur Shah. The Ghat houses the famous Nepali Mandir and Lalita Gauri Mandir. Lalita Ghat, renowned for its Ganga Keshava shrine of Vishnu and the Nepali temple, a typical Kathmandu-style wooden temple which houses an image of Pashupateshvara – Shiva’s manifestation at Pashupatinath in Nepal – and sports a small selection of erotic carvings. This Ghat is dotted with several temples. The well-known 'lingam' of Ganga Keshav and shrines of Gangatitya, Kashi Devi, Lalita Devi and Bhagirath Tirtha are affiliated to Lalita Ghat.