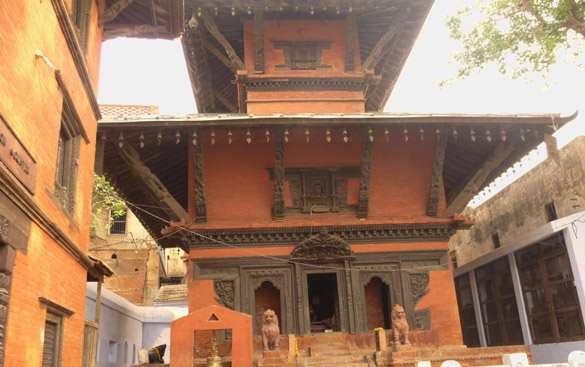 Nepali temple is situated at Lalita Ghat, and was constructed in the 19th century A.D by the late King of Nepal. The temple features a blend of intricate woodwork and red hued concrete which are brought from Nepal. This temple houses a widow’s ashram. A small Nandi statue sits outside the main sanctum, which houses the Pashupathinath Mahadev Lingam. Nepali Temple is one of the oldest Shiva Temples in Varanasi. King of Nepal, Rana Bahadur Shah took exile in Varanasi from 1800 AD to 1804 AD and titled himself as "Swami Nirgunanda". During his exile, he decided to build a replica of Pashupatinath Temple in Varanasi. Construction of the temple commenced during his exile / stay in Varanasi. During the construction, Shah moved back to Nepal. On 25th April 1806, Rana Bahadur Shah was stabbed to death by his step-brother, Sher Bahadur Shah. His son Girvan Yuddha Bikram Shah Deva completed the project 20 years after the deadline. The land was later transferred to Rana Bahadur Shah by Kashi Naresh in the year 1843