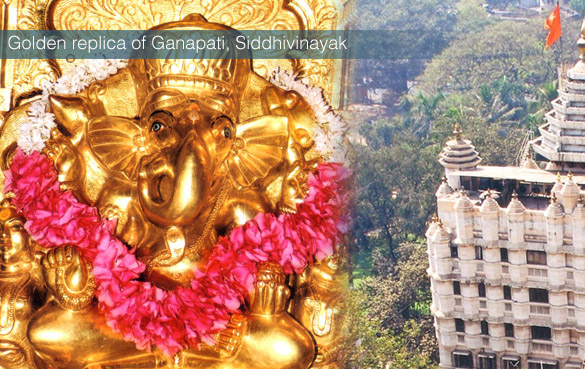 With the firm belief that nothing new should ever be embarked upon without invoking the blessings of Lord Ganesh, the Shree Siddhivinayak Ganapati Temple at Prabhadevi is understandably the most popular of places of worship in Mumbai. It was but a humble consecration by Mrs. Deubai Patil in early 19th century that is supposed to have started attracting hordes of worshippers soon after India’s independence to ‘Siddhivinayak’, as it is popularly known.

Located at Prabhadevi in central Mumbai, the temple’s idol of Shree Siddhivinayak was carved out of a single black stone with the trunk on the right. This is considered a rather unusual appearance of Lord Ganesh. The upper right and left hands hold a lotus and an axe respectively while the lower right and left hands hold a rosary (japmala) and a bowl full of ‘modak’ respectively. On the forehead of the deity is an eye, which almost looks like the third eye of Lord Shiva. On both sides of the Lord Ganesh idol are placed one idol each of goddesses Riddhi and Siddhi and it is because of these two deities along with that of Lord Ganesh that the temple is called the Siddhivinayak Ganapati Temple. These goddesses signify sanctity, success, wealth and prosperity.